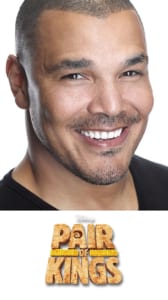 Possessing a naturally rich bass quality, Geno Segers’ voice gained him enough attention to attract an agent’s ear. This led to Segers being cast in the role of Mufasa in the an Australian stage production of The Lion King. With an intimidating voice and appearance, Geno is best known and identified with the comedic series Pair of Kinds, aired on the Disney Channel. On the series, Geno plays the role of Mason Makoola, the fearson father of Mikayla Makoola (played by Kelsey Chow).

Emily and I wanted to say THANK YOU AGAIN!