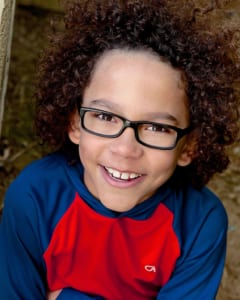 I just really hope you know that what you’re doing in giving back in this way, helping so many actors, is nothing less than amazing. The time and knowledge that you give, along the other celebrities that come participate in the program as well, is just a blessing for so many!

I just wanted to take a few minutes to let you both know how absolutely grateful I am for what you and The Celebrity Experience program has done for Ethan in helping launch into this world and career.

The interest in him at the showcase was overwhelming. He signed with a manager before we even left LA which was amazing, and the momentum has not slowed. Shortly after the showcase he also signed with an agency. He has self-taped and been on countless auditions. He has done a more than a handful of background work (which I know to most isn’t anything spectacular, but he loves just being on set and the chance to be seen). He was recently in the Marshmello/Bastille video (second birthday party). He has done two short films. He’s schedule to film his third in a few weeks. He has been put on hold for several major companies for commercials. He has not yet had the chance to film one, but it’s coming, very soon.

Ethan may not currently be, and may never be, the overnight success story. But he is determined to be a success nonetheless. He understands that it takes time, lots of work, and that nothing is personal. This year has been a whirl-wind of learning and new experiences. All thanks to you (and Matt Timmons who auditioned him initially) and the knowledge we gained when attending the showcase! The best part, is hearing the AD tell you that the minute the saw Ethan slate they knew he was the one for the role, or how Ethan personable he is when he auditions and that they just love his professionalism. These are the tips and tricks that we were able to take away from your program(s). It truly does make a difference from the minute you walk into a room.

So thank you again so much! Looking forward to what the future holds for him. And hoping our paths cross again, on and off camera. :O)

4 Simple Tips to Prepare for Your Self-Taped Auditions