I always wanted to break into the acting business and be on television but CGTV actually helped make my dream possible. 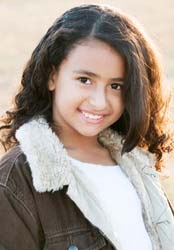 Susana Hoyos, a local teen from CGTV in Miami, has just been cast to star in Nickelodeon Latin America’s Grachi, the network’s new live-action television program for teens and her television debut. Shot in Miami, the comedy series follows Grachi, a young girl who must learn to use her new found magical powers all while coping with her school, boys and just growing up. Grachi will be produced in Spanish and will be released in Latin America this spring. Susana Hoyos and her show, Grachi will also be distributed in the United States, Latin America and Europe.

Hoyos, who recently attended Phill Lewis and CGTV R’Mante’s CGTV in Miami and is represented by Lauren Greene from the Green Agency, credits her acting debut to her recent camp experience and training. “I always wanted to break into the acting business and be on television,” said Hoyos, “but CGTV actually helped make my dream possible.”

If done correctly, acting workshops can provide both professional and personal growth opportunities for young children and teenagers. The experience of individualized camp structure and emphasis on commercials, television and film gives attendees greater understanding of acting and the multi-faceted opportunities that accompany the experience including increased confidence in acting abilities and pride in accomplishments.
CGTV R’Mante, who can currently be seen on the Disney Channel and Saturday mornings on ABC playing the role of Esteban on the hit television series The Suite Life of Zack and Cody, offers a six week celebrity acting camp taught by celebrities in cities across the United States and Canada.

“I don’t think it should be that hard for kids and teenagers to follow their dream of acting. They just need training, confidence, true knowledge of the business and a few tricks to break into the Hollywood,” says R’Mante. “It’s one thing to teach acting but it’s another thing to actually live in Hollywood and make a living as a professional actor on television. We want to pass this knowledge on the next generation of young actors and their parents.”
Graduates of CGTV appeared in hits including NBC’s Parenthood, Alice in Wonderland with Johnny Depp, and Modern Family to name a few. For more success stories and upcoming workshop in a city near you, visit http://www.celebritystar.tv